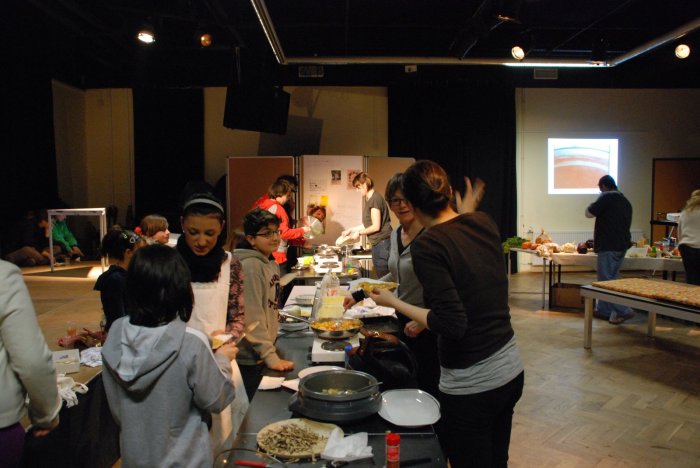 Collective project focused in the multicultural life in the city of Leipzig, Germany. Pointing out international immigration to the former East Germany after the Wall Fall, the project wants to highlight the current identities in the city through cooking events where people are invited to take the everyday food they prepare at home, according with their cultural and ethnic backgrounds.

The events set tables where visitors put their food, and can remix them with other ingredients and species, looking for new dishes or mixes that can illustrate possible new dishes, as a portrait of the current multicultural mixes in today Leipzig. Besides, the participants were interviewed and invited to take part in a diagram on multicultural perceptions on the city life.

Target groups: Immigrants, locals, Germans moved from elsewhere and passer-by where invited to interact in different locations and settings.

This project was developed in two time periods:
1) From October 2008 to February 2009: Street intervention and two events in OFT Rabet center (Leipzig-East).
2) Developed in an applied way, working in a sociocultural framework from November to December 2009 with workshops for young mothers in Leipzig West (Lindenau).
Team: Kristina Draskovic (Serbia), Carlos León-Xjiménez (Peru) and Zoe Kreye (Canada)